Stray Cats Home At Cat-HQ. Getting Started About Foods About Breeding Strays Help How Do I? Landmarks in SL Our HUD Auctions & Markets Stats, Symbols & Colors About Our Traits Traits List Updater Info Owner CAT Pics Breeds & Pelts All Eyes 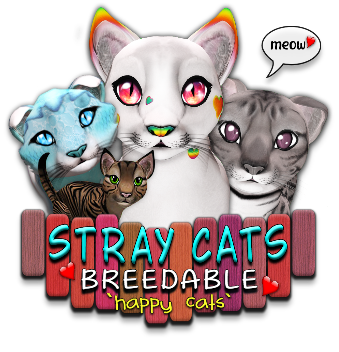 Strays have a total count of 8 possible traits:   We tend to breed for the desired traits we want.  But if you are interested in what features are rare, add the Cat HUD v1.44 to yourself, and check out the Webtools.  There are tabs there with rarities on pelts, eyes, etc., where you can see how many of each color exist for each breed.

All breeds can be cross-bred, intermingled, to produce some interesting results :)

But you can breed true to a specific Breed type and/or pelt color.

Pelt colors are also know as the genome.

Not all breeds have the same colors of pelts, but there are many that occur across multiple breeds.

See your Webtools, under the *Pelts Rarity* to see every color available for every breed.  You can also see them here, on our website.

The standard starter colors, which are NOT considered a trait are:   Chocolate, Brown, Light Brown, Seal, Tawny,  and of the two-tones, Blue/Red, Brown/Red, Red/Chocolate, Red/Black and Chocolate/White

Faboos, because there are no 'starter' faboos, their pelt colors are all considered 'traited'.

Standard genomes are more dominant, while others like Silver, Fawn, Pink, etc. are recessive, and harder to pass along.

As an example:  Take this possible mating:

The baby count get any of the traits from either parent, mixing them up entirely, or you can see a throwback trait from the family lineage that has passed down through the generations and is hidden.  Both the male and female of this pairing have the set of traits you see, and a hidden set of traits, inherited.

Shade: Blush   <----- from Great-grandmother on mother's side that is hidden in the female.

This baby could carry the recessive/hidden gene for 'silver' or possibly the hidden pelt color of a parent.   If used for breeding, it could give you silver babies.

All breeds but Faboos, use a standard genetic breeding code, mimicking real life.

Faboos have an additional bit of code that allows them to randomly pop out with a completely different color than the parents.

All genomes of all breeds have a set probability number in the database, making some much more rare and tougher to get.

Breeding siblings or parents-back-to-offspring can increase your chance of bringing out the hidden pelt from the parents.

Our Faboos are special, non-traditional kitties that don't necessarily always follow the rules :)

They have a combination of some genetics with their faboolous 'random' random factor.   Therefore, when breeding them together you can pass a coat from the parents, or it could be a totally random coat available in their breed, and could pass a total different Faboo (rare chance).

FYI:  There are NO hybrids.   Crossing a tiger with a skunk will not make something else. The baby will either be tiger or skunk.

All LE pelts themselves do not pass.  In that respect, they are collectible.  But they too have a hidden gene to pass, and of course, can pass all other traits.

Breeding two LEs together will ALWAYS result in a Classic Tabby Baby with a random tabby color.

DOS: An Acronym for the Direct Offspring of the two parents.

OS:  It is an Acronym used for the Offspring, that could be a grandchild or further back in generations than a direct baby.

The difference in terminology between a DOS and OS is that we name OS a kitty that is not a direct offspring of a trait we want to pull out.

SIBLINGS:  Those are the kittens that have the same Mom and Dad). The kittens that are siblings they do not necessarily looks exactly the same but they are carrying the same breed and pelt genes from their parents.

HALF SIBLING:  When two kittens share one parent in common, but not the other.